The EPA estimates that combined emissions from Diesel trains in Chicago, Los Angeles, Houston, Dallas, Baltimore and Detroit is equal to the emissions created by 55 million cars meeting today's automotive emission standards.  This amounts to 37% of all automobiles driven in the United States today.

Global warming is a fact that we must face and act responsibly or our existence as we know it will cease. Freight and passenger transportation has been determined to be a major contributor to 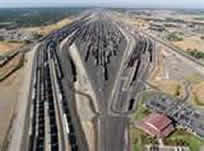 the warming of the environment.  Freight transport by train is the most economical way to move large amounts of freight for long distances.  However it is polluting and getting worse as freight train traffic has doubled in the last 35 years. According to the EPA's most recent data, by 2030, trains will emit almost twice as much soot as trucks.  By 2030, the EPA estimates that trains will be responsible for about one-third of all particulate pollution in the air from the transportation sector, unless solutions are found.  Communities located near Ports and rail yards experience the highest levels of pollution. Today trains release levels of smog-forming oxides of nitrogen called NOX comparable to 120 coal-fired power plants.  In Chicago, for example, locomotives discharged as much NOX into the air in one year as 25 million cars meeting today's automotive emission standards.
According to the Texas Commission on Environmental Quality, marine vessels and trains in the Houston-Galveston area, accounted for 41 percent of the region's off-road nitrogen oxide pollution in 2002.

The California Air Resources Board analyzed diesel pollution from the Roseville Rail Yard, the largest service and maintenance rail yard in the West.  The study found that the cancer risk level nearly doubled for these residents. 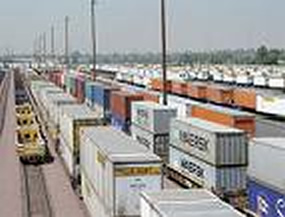 A 2007 study done by the California Air Resources Board, determined that 3,700 premature deaths per year occurred in the Los Angeles Basin as a direct result of pollution caused by ships, rail and trucks involving the Long Beach and Los Angeles Ports.  Additionally 980,000 work days per year are also lost. To quote the Air Resources Board “The Californians who live near ports, rail yards and high traffic corridors, are subsidizing the goods movement sector with their health.
According to the Natural Resources Defense Council… “locomotives are among the most dangerous and pervasive sources of air pollution in the United States”.

Diesel locomotives are really nothing more than mobile electric generating plants burning diesel fuel to run electric generators that drive electric motors connected to the locomotives wheels. These rolling electric power plants consume three times more fossil fuel per kilowatt hour of electric energy produced than a stationary power plant.  In addition diesel locomotives produce between 140 and 273 times more NOX and particulate pollution than a power plant. On the other side is the diesel truck transportation system which creates more pollution per pound of transported materials than train locomotives.
Any attempt to improve the negative impacts of the transportation systems pollution is offset by the increase in traffic. Efforts that decrease pollution while the amount of traffic increases at a faster rate is not the answer.  What is needed is a 100% SOLUTION.