A System of Systems Approach: Analysis of the Flow of Goods and People

As mankind has developed throughout the centuries the means of moving people and goods has been a determining factor in the relative success of a society. The size of an army was limited to the level of communications between the troops, and the support system required to sustain them. Modern nonlinear analysis indicates that adaptive structures such as societies have the same nodal interactions as found in other adaptive structures such as the human brain or the internet. 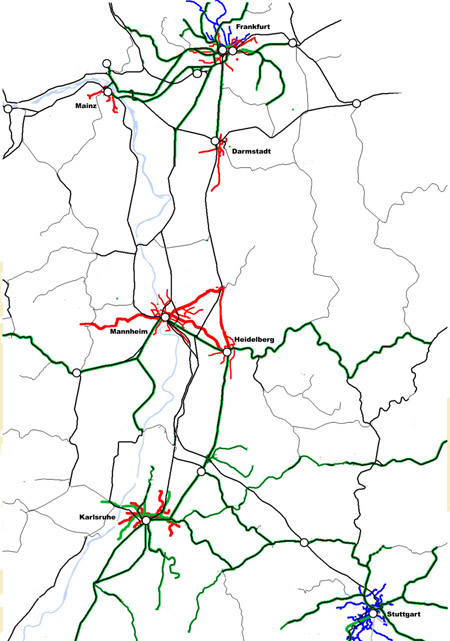 Utilizing this knowledge for analyzing transportation infrastructure along with the fact that the connections of nodes that are now a worldwide network, it becomes apparent that the solution must be a multi-dimensional, multi-nodal integrating system.

As a result of the need to increase the speed and ease of moving people and goods in a nondestructive sustainable way, the transportation systems that once competed must now work together to create a single multi-dimensional multimodal system. In order for the optimal connection between the various nodes, (being geographical such as cities or transportation centers on one hand while the connections are the various forms of transportation, the modes) the connections become paramount to the process.

The object then is to step into the process and develop the most effective connections between the various transportation modes with the result being substantially increased throughput with lower energy consumption. These connections must be developed in such a way that they function without interference in the smooth flow between the modes. Interference in terms of air travel can be seen in such things as the slow time consuming process of going through security in the United States. In terms of node connectors like trains, it means the elimination of grade crossings as an example. For automobiles it would be such things as slow inefficient unsynchronized traffic lights or over crowded highways.

Each transportation system optimizes a particular frequency level. Commercial air travel is optimized for longer distance and generally is the best most efficient transportation mode above a minimum of 300 to 500 miles. Shorter commercial airplane trips are characterized by lower fuel economy per passenger mile, more employee cost per passenger mile and delays become more pronounces in that the delay time cannot be corrected by slightly higher speeds over distance causing interference in the entire airport system. With greater distance these negative factors disappear and the entire system for that matter is optimized. When a part of the system is operating below the optimal system operations of that particular mode because of the short distance between nodes, it should be modified instead to use other more efficient travel modes between the nodes. The optimal type of connection between each node differs by distance. Each connection between nodes in order to reach those optimal levels may require different modes of transportation. This analysis allows for a road map which sets forth a framework to work within to create the most efficient multidimensional, multimodal system to move goods and people.

The aspect of sustainability is paramount for any system. For if the system is disruptive to its environment it will result in the creation of disequilibrium. Global warming or at least the impact of mans activities on changing the environment cannot be disputed. As we have created disequilibrium in the environment we are obligated to correct it if our environment is to be expected to continue to support us.